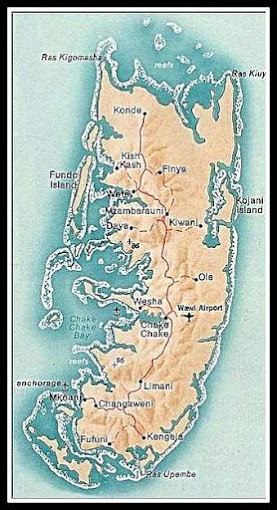 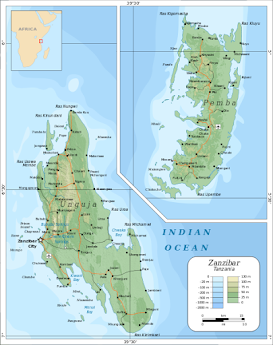 For amazing undersea photos of the coral reefs surrounding Pemba, visit Farat Jah's page on Flickr. Search the site for "Pemba Island" to see other excellent photos by different photographers.

Zanzinet has a  useful overview of Pemba and its main towns and resources.

Pemba is one of the islands in the Zanzibar Archipelago, a semi-autonomous region of Tanzania. Approximately 40km from the East Africa mainland, it is an equal distance from the island of Zanzibar.

Pemba has 988 square kilometers of forested and fertile land and over 30 small islets, numerous bays and inlets and 100s of kilometers of coastline. It's population of 408,000 is concentrated in the three towns of Wete, Mkoani and Chake Chake.

The island two political regions are Northern Pemba and Southern Pemba. The northernmost peninsula, Ras Kigomasha, the location of Pemba's most famous beach, Vumawimbi,  is reached by driving through the Ngezi Forest Reserve, a lush and biodiverse paradise and a prime birdwatcher destination.

Separated from the rest of the island, Ras Kigomasha is ideal for tourism development. There are three existing resorts  and several others under development. Equally enchanting locations for private homes and resorts can be found in the vicinity of Wete and Konde as well as on South Pemba's equally gorgeous Ras Kingoji bay. For more detailed information about Pemba, please see the following resources.

Mambo Magazine has an article about the "Top 10 Things To Do On Pemba Island" including diving, visiting Ngezi Forest, local healers, and several other unusual adventures. There's a few more we'd add--among them, fishing in the Pemba Channel, bicycling Ras Kigomasha, taking a canoe tour of the mangrove forests, a dhow trip to one of the little-known tiny islands for snorkeling, a casual walking tour of smaller villages, a guided night forest walk in Ngezi Forest or trying some of Pemba's culinary specialty's such as urojo (a soup), the island's extraordinary lobster and fish, the wonderful Pemba halua, a sweet best eaten with a tiny cup of strong coffee, and, of course, Pemba's famous honey.

Useful--and readable--information about environmental challenges in the islands can be found in this book edit by Nell Hamilton and published by the Chumbe Island Coral Park. Chapters on the mangrove forests, sea grasses, and coral reefs, among others, are available as pdf downloads on the website.

In addition to Google, Open Street Map is a good source for maps of Pemba. Click on the logo above to go to the  "cycle" map  which shows small roads and geographical features  at the detailed level.